The road to Coober Pedy

From Adelaide we travel back to Port Augusta and turn north. After following the west side of the Flinders Ranges for a while we then get to treeless plains. 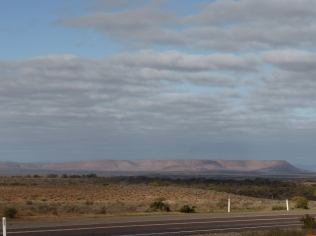 At our overnight free camp we are treated to a lovely sunset. 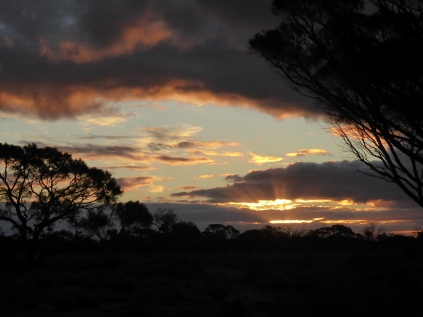 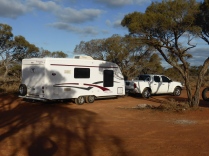 Surprisingly, the road from Woomera to Coober Pedy has few trees. Not what I expected….but then again, perhaps I hadn’t given it much thought. 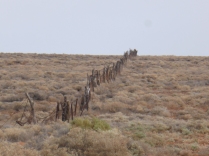 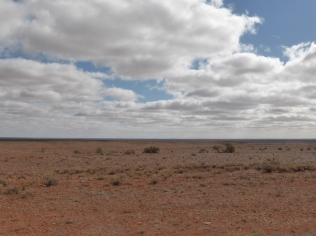 There are several large lakes up this way…but due to the drought conditions here there is very little water in them. 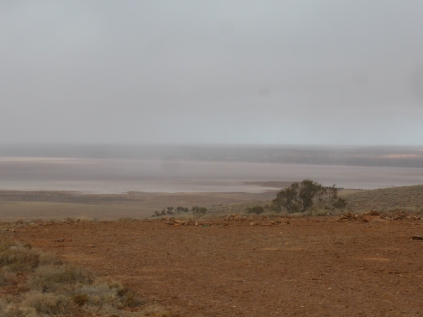 The exception was Lake Hart…and we were one of many caravaners who had stopped to enjoy the scenery. 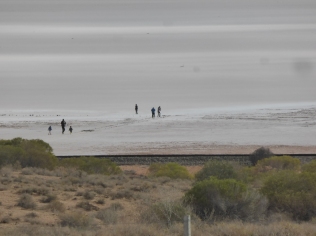 Coober Pedy is a town of seasons. During winter the cooler months bring locals back to the area to cater for the hugh influx of tourists heading north. Over summer when the temperatures can get into the 50’s only the die-hards stay on. Most businesses close and those that stay would probably live underground in dugouts. The above ground houses are occupied by the local aboriginal community or by locals who return only for the winter months. 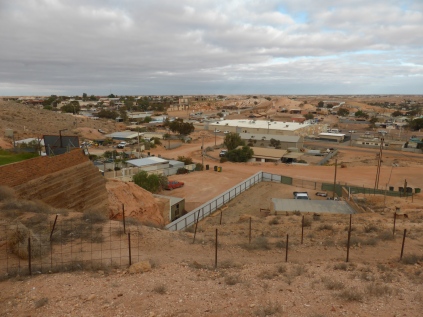 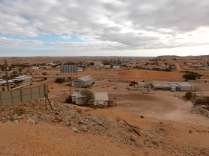 This is one of the nicer entries to a dugout. Above the limestone hills flues to vent the underground rooms are evident. 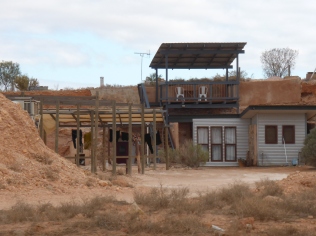 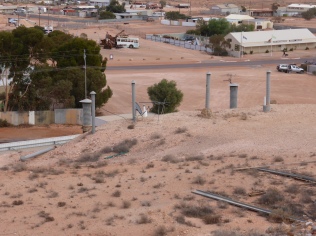 This is every locals dream front yard….spare parts everywhere! You never know what you might need one day. 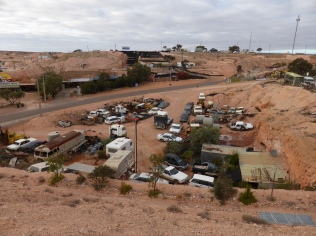 We decided on a tour of Coober Pedy and its surroundings with Stuart Range Outback Tours.

We first visited a local ‘new build’ that will be featured on Grand Designs Australia at some stage. The home is a typical dugout and so far the only work done has been the excavating by the tunnelling machines into the hill – this is how most people live up here in Coober Pedy – underground! With temperatures reaching up to 58 deg. C in summer and -2 deg. C in winter the best place to be is underground. The major walls and roof retain the roughness left by the tunnelling machines and will be a feature, but coated with Bondcrete – a waterproof sealer that will seal the surfaces to stop dust, water and erosion problems. The colours are beautiful. The openings will be glass to allow some natural light – with a large verandah out the front to keep the sun off the glass. 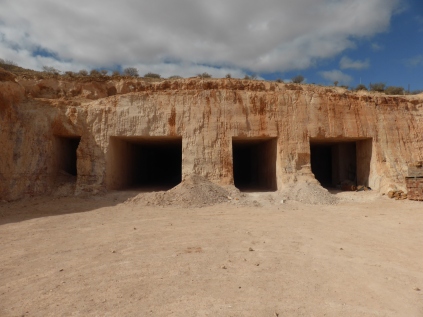 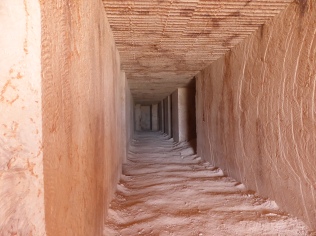 Jim was interested to see the 18 hole golf course. Hard to tell where it is! The only clue is the oil scrapes (greens). 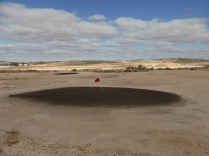 Next we passed through several of the opal fields. These photos are taken out of the coach window as we were not allowed to leave the coach due to the dangers of mine shafts. 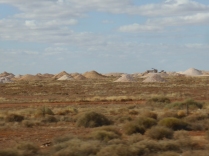 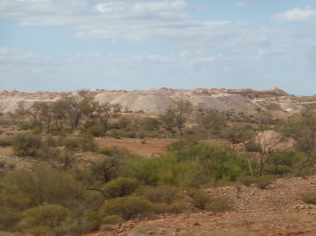 From here we travelled out to The Breakaways. This natural landscape was once an inland sea. Today the scene is very different. 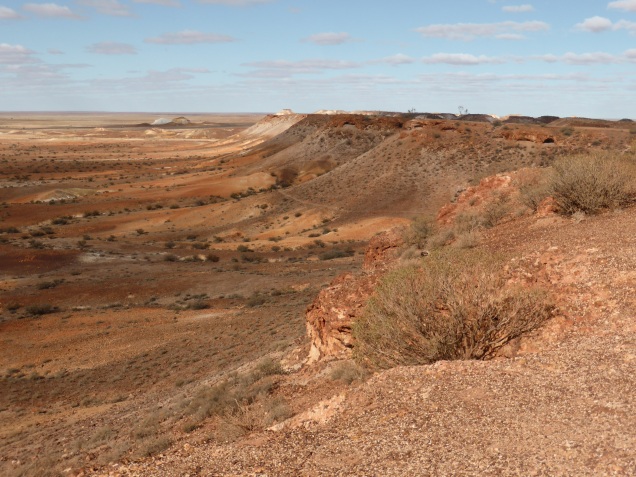 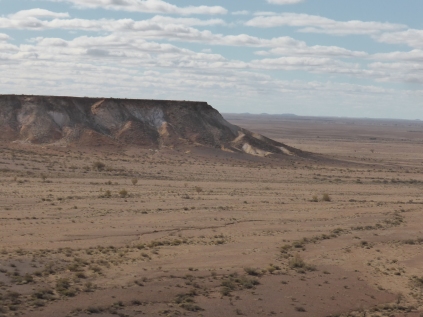 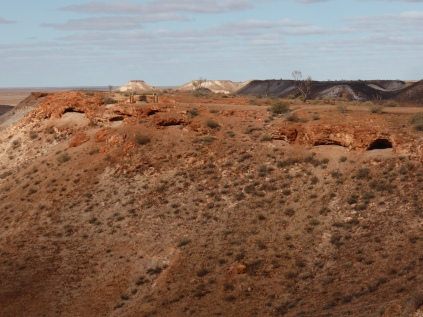 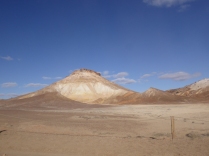 The Dog Fence stretches approx 5,300km from the south Queensland to the Great Australian Bite. It is the longest continual construction in the world and was built to stop the Dingo’s from traveling south into the sheep farming areas of New South Wales, Victoria and South Australia. It is generally considered to have been a success in controlling the wild dogs in these areas. Out here the landscape is more like a moonscape. 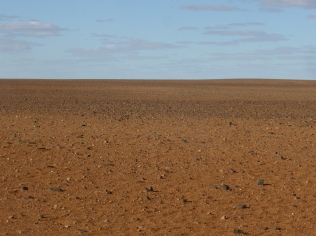 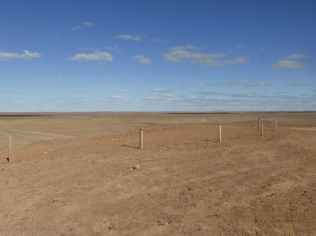 Our final stop was to visit the Serbian Orthodox Underground Church which was built in 1993. 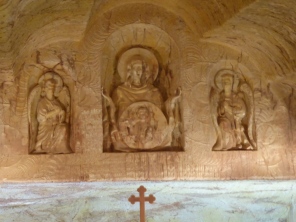 We also visited one of the many opal shops for a look at some of their precious collections and a lot of tourist jewellery.

Such an interesting place to visit.

12 Responses to The road to Coober Pedy